Enter an era of war within the world of Ivalice. The small kingdom of Dalmasca, conquered by the Archadian Empire, is left in ruin and uncertainty. Princess Ashe, the one and only heir to the throne, devotes herself to the resistance to liberate her country. Vaan, a young man who lost his family in the war, dreams of flying freely in the skies. In a fight for freedom and fallen royalty, join these unlikely allies and their companions as they embark on a heroic adventure to free their homeland.

This guide will contain the following once it is completely finished:
- A walkthrough that'll guide you through the story, help you obtain all the best weapons and armor, and defeat every monster
- Tips for getting the best equipment from the Bazaar and from enemies
- A detailed look at all twelve job classes in the game, and the best ways to combine them and characters to form the ultimate party
- Sections listing how to find - and defeat - all Marks and Rare Game
- Citation of the differences between this version of the game and the original
- A thorough explanation of all of the game's mechanics
- All sidequests, including Trial Mode
- A trophy guide that will get you that shiny Platinum Trophy

- A detailed walkthrough of the main story up until right after exiting The Great Crystal
- Some Hunts and Rare Game are mixed through the main walkthrough, showcasing a good time to do them (they will receive their own section later)

- Pharos and Sky Fortress Bahamut sections added to the walkthrough.

Added the "Racing With Rikken" section. 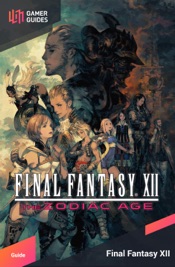